‘The Little Melton and Colney Board School’, was officially opened on 6th September 1875, after Miss Alice Maud Mary Boughey was appointed first mistress at a salary of £60 per annum, and Rev. John Hervey Payne, Rector of Colney, became Clerk to the Board of Governors. Miss Boughey’s maid was to live rent-free and be subject to a quarter’s notice to leave her position.

On the day of opening, twenty-two boys and twenty-seven girls were enrolled, and the following day nine more children attended. By 13th September there were sixty-eight pupils in all on the books, but the problem was getting them to class, and keeping them there, especially in the winter months. Sometimes the snow proved too deep for the children to get through, especially if their boots and coats were inadequate for the conditions, and there was a lot of sickness too. In, 1878, for instance, an outbreak of smallpox closed the school for three whole weeks. Epidemics of what are now considered to be minor diseases, but which were life-threatening then, before immunisation was introduced, regularly caused the school to close. Whooping cough caused numbers to fall so low from October 1888 onwards that the school had to be shut, and was only reopened after the Christmas holiday that year. Children were often kept away to help their parents, or in summertime to help with the harvest, or to take food out to the fields, where their fathers were working long hours. The few pence a week that children could earn by scaring birds in spring, gathering nuts for the pigs in autumn, or helping with harvest was an important supplement to the family income. 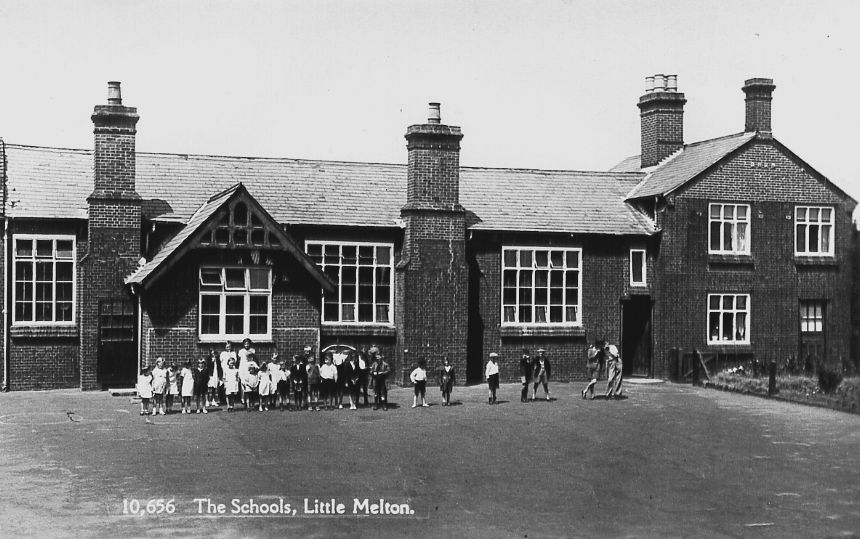 The school in 1930sBy March 1876 the number of children enrolled was 79, and the schools’ inspector recommended that more staff should be employed. Fortunately a 16-year-old pupil teacher, a Miss A. Milk of Stanfield, was appointed in 1877, for soon afterwards Miss Boughey had 96 children on the register! Miss Boughey was to remain at the school for a further ten years, and to depart suddenly in February 1887, whereupon Miss Fryer was promptly appointed headteacher. 1887 also saw the arrival of new tenants at Colney Hall as Hugh Gurney Barclay (of the Norwich banking family), his wife Evelyn and children took up residence there. Like the Scott family before them, they took an immediate interest in the school where so many of the children of their labourers were being educated. The school flourished! HM Inspector of Schools Report of 1899 described the discipline as ‘excellent’ and the instruction as ‘careful and intelligent’. By this time Miss Kate Hall was headmistress and the Punishment Books of her regime can still be seen at the school. The usual punishment, inflicted by Miss Hall herself, was either one or two strokes of the cane on the back of the hand, depending on the seriousness of the offence. The same names constantly recur. Little Eva Bowman, aged 9, was seemingly always in trouble in 1900, and received no fewer than five canings between September and Christmas for mistakes in her knitting, or for blotting her copybook, (yes, literally)! On another occasion Eva and her sister, Ada, also 9, (were they the ‘Terrible Twins’?) were punished for playing in the road and arriving in school a quarter of an hour late. And what did Miss Hall do, two years later, when another little Bowman girl, Winifred, appeared on the scene? She caned her for “copying incorrectly’. Miss Hall must have been very relieved when these children left the school for one in Norwich. Other punishable offences were playing with the ink, copying off other pupils, disobedience, kicking, fighting, climbing over the school wall in playtime and stealing turnips from the adjoining field. Very occasionally, indecent language was cited. Sometimes children arrived at school so hungry that the packed lunches brought by fellow pupils proved too much of a temptation, and were rifled. This led to canings on three occasions for one young pupil. By 1914 a rebellious young lady named Nellie Woods had become the bane of Miss Hall’s life, on many occasions receiving as many as six strokes of the cane for such offences as spoiling her needlework, hitting her sister and playing with the ink. Nellie must have left before 1916 as in that year there were only three entries for the whole year, and none of them concerned Nellie! The admission register for the years 1884 to 1934 also survives and records the names of all the pupils, years of attending school and the date and reason for leaving. In the early years a very common reason was that they were wanted at home, but many children are recorded as leaving the district. This figure tends to be balanced by families coming into the area. In 1901 two children were withdrawn from school as their families were emigrating to Canada. Sadly, every so often, the death of a pupil is noted, a seven-year-old in 1895, an eight-year-old in 1896 and a ten-year-old in 1898.