By the early 19th century, however, the provision of education had begun to be regarded as an important priority by many individuals and groups, and not just for the better-off members of the population. Two societies, the British and Foreign Schools Society, founded in 1808 by the Nonconformists, and the National Schools Society, founded three years later by the Anglicans, had built more than 18,000 schools throughout the country by the middle of the century, their main aim being to instruct the young in the principles of religion. In Great Melton, for example, a National School for 66 boys and girls was erected in 1852, at the sole expense of the then lord of the manor, Mr. Charles Lombe.

Unfortunately it has not been possible to find any more records that tell us about schooling in our village until the middle of the 19th century. We don’t even know if schools continued in existence in the intervening hundred and forty years or so after Mr Low received his licence to teach. ‘White’s Directories of Norfolk’ published in 1836 and 1845 make no mention of a school for a population that by then was over 300. However, the 1842 Tithe Award Map shows ‘school house and gardens on Hethersett Lane’, (now known as Burnthouse Lane), on land not built on at the time of the Enclosure of the village in 1817. 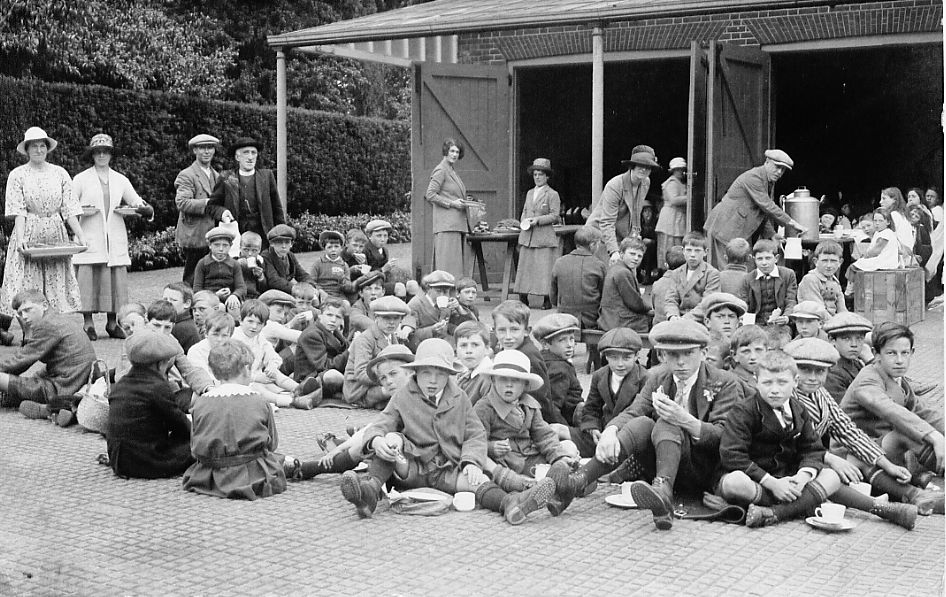 Little Melton & Colney school outing to Colney Hall in the 1920s for Sports in the Park & Tea in the Coach house. The adults standing to the rear, are thought to be, left to right; Miss Wilson, teacher; Miss Cobett, infant class teacher; Tom Crane, Mr. Barclay’s chauffeur; The Rev. Priestland, Vicar of Colney; Rosamund Barclay, daughter of Mr. Barclay; tiny Miss Young; anon; Mrs. Kinch (part obscured by door) head teacher; and finally, Mr. BarclayThe 1851 Census includes details of a Miss Sophia Anna Jane Long, aged 22, daughter of James Long, a house and land proprietor of the village, and his wife Harriet, and describes her rather grandly as ‘governess of a school’. This may or may not have been a room in their house here. The next edition of ‘White’s Directory’ in 1854 does mention a school in the village, with the information that it was ‘a parochial school supported by subscription’ and that the teachers were Charles and Mary Child. We are reasonably certain that this school was again a ‘dame school’ with classes being held in the Childs’ house in what is now called Burnthouse Lane.

The recent discovery of an earthenware inkwell on the site seems to add authenticity to the story, and older residents of Little Melton still remember a house, said to have been the old school, (demolished in the early 1960s), which contained a particularly large room. The 1861 Census reveals the presence of a teacher named Mary Goward, aged 20, living in the village with her parents John and Mary and brother James. Both men are described as agricultural labourers, but again we do not know if Mary taught in the village or elsewhere. By 1868 it was a Miss Robertson who was running ‘a village school for boys and girls’ according to Harrod’s Directory.

Two years later an Act of Parliament, Forster’s Education Act, made provision for compulsory education for all children between the ages of 5 and 13, and schools and schooling started to assume the format with which we are familiar today. The act made large sums of money available for the building of school premises and set up boards of governors, elected from the local community, to run them. In 1874 a substantial brick-built school was constructed alongside the road connecting the two villages of Colney and Little Melton, on the parish boundary of the two, ever since known as ‘School Lane’. It was built to accommodate eighty pupils from the two villages and built at the enormous cost, (in those days), of £750. It included living quarters for the schoolmistress and for ‘a maid to wait on her’. Many of the children who attended had fathers who worked as agricultural labourers on the Colney Hall estate, and had to walk the mile or so to and from school in all weathers.