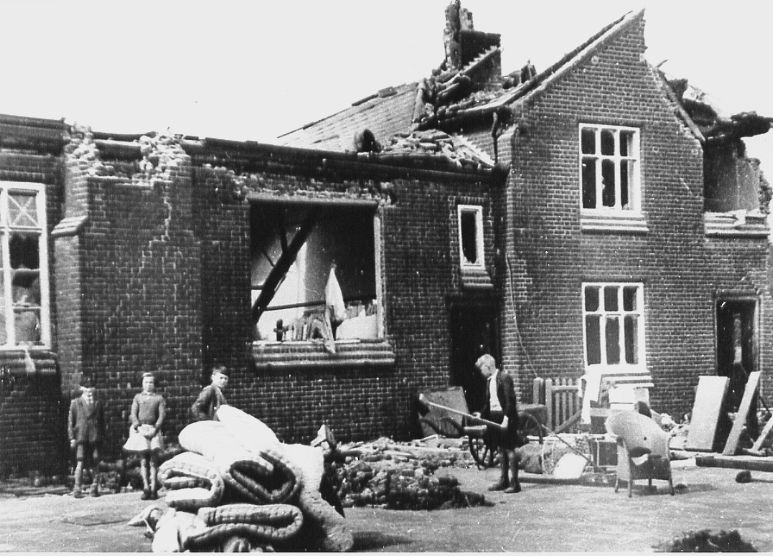 Bombed in 1943 The Barclay family at Colney Hall continued to show their interest in the school, and every so often the children were invited to have a summer picnic in the grounds, and to walk down to the River Yare which flowed through water meadows there. The Hall itself was usually out-of-bounds. The children were also given treats at Harvest and Christmastime with tree presents for everyone, and ‘plenty to eat’, as recalled by one ex-pupil appreciatively. Mr. H. G. Barclay and his tenant farmers also offered jobs to all the school-leavers each year. At one time two lions had been kept at the Hall but a terrible accident had occurred in 1911. The eldest son of the family, Terence, (a lieutenant in the Scots Guards who had survived active service in the Boer War), was clawed in the neck and died of septicaemia. After this, the lions were sent away to a zoo in Dublin.

September 1939 was to see the start of the Second World War, and when school opened for the Autumn Term, there were 61 local children and 11 evacuees. One of the wartime pupils recalls that the evacuees were often late for school, but never seemed to get into trouble, which did not seem right to the rest of the class. The following April all the pupils were fitted with gas masks, and in January 1941 the first immunisations against diphtheria were given to the children.

Three years later in September 1942, the Managers’ Minute Book of Little Melton Provided School, (as it was now called), records the sad death of Mrs Kinch and the appointment of her successor, Mrs Barbara Buckton of the School House at Baconsthorpe, who was to take up her new post in March 1943. Only just a little over two months later Mrs Buckton and her son, David, were returning to the Schoolhouse from the air raid shelter, at the end of a raid on Norwich, when the School received a direct hit from a stray German bomb. This damaged the whole building beyond repair. David was injured and carried by his mother to the nearest house to summon help. Fortunately his injuries were not too serious, and he and his mother were given temporary accommodation by Mrs Dorothy Broughton, and later by Rev. Frost, until they could be found a more permanent home. School, meanwhile, managed to continue, despite the difficult circumstances. Some pupils were taught in a room at the Rose and Crown Public House, (now the Village Inn), while others were sent to Bawburgh, Hethersett, Cringleford and Great Melton schools. Later, some months after the bombing, a temporary prefabricated school was erected on the site of the bombed school. This ‘temporary’ school lasted for over thirty years until the present school was officially opened in the mid-1970s