South Norfolk Council (SNC) is consulting on plans to build at least 1200 houses in villages similar to Little Melton, no upper limit has been set.  One preferred site and two shortlisted sites, each considered suitable for 25 houses, have been proposed for Little Melton.  There is also a proposal to include a small triangle of land between Ringwood and Limes Close as being within the Settlement Boundary.

It should be noted that the last Local Plan stated - Policy 15 of the Joint Core Strategy (JCS) identifies Little Melton as a Service Village in which land will be allocated for small-scale housing growth in the period 1 April 2008 to 31 March 2026, within the range of 10-20 dwellings, subject to form, character and servicing constraints.  Land at Ringwood Close was put forward for 20 houses, which have now been completed.  However a further 58 houses have been built at Limes Close and at All Saints Close.  Work will start soon on 30 more houses, opposite the school.   So a total of 108 houses will soon have been built.

The land now offered for development - 2021 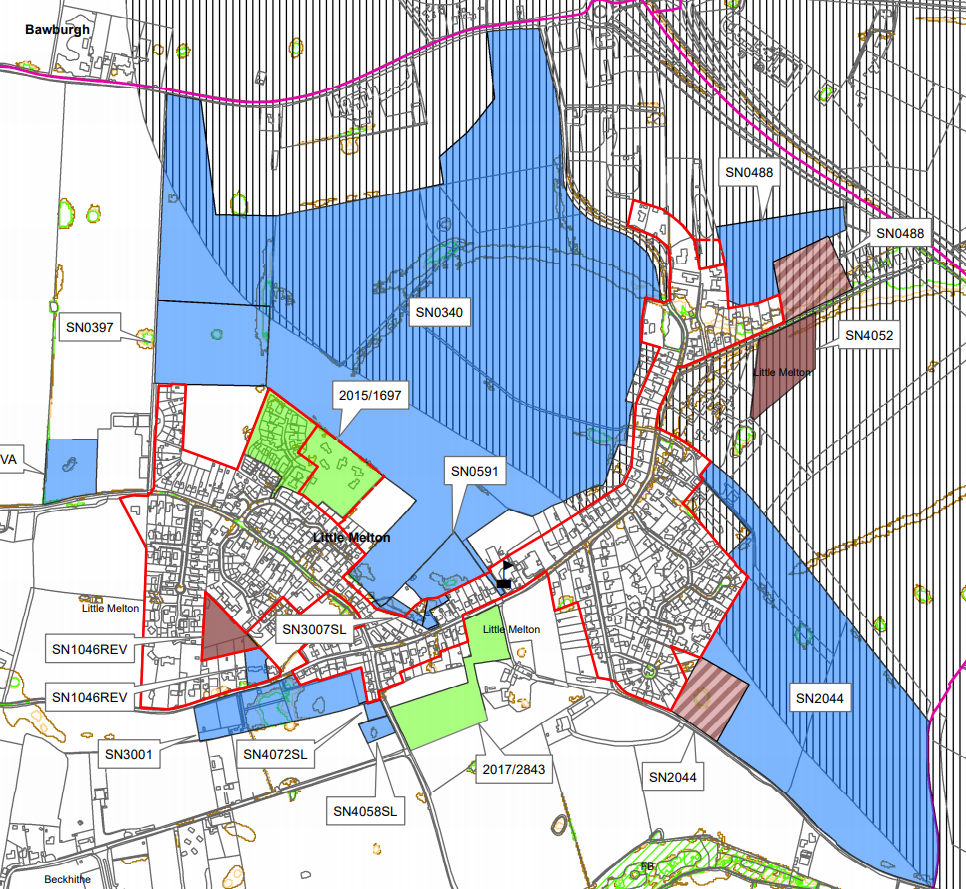 Click on the map to see an enlarged version

SNC have designated site SN4052 (shaded purple) as the preferred site and have shortlisted site SN0488 (shaded striped purple). Both sites are in the Landscape Protection zone (shown with vertical hatching on the plan).  The zone is supposed to be kept open.  Little Melton Parish Council (LMPC) is very concerned that development of either of these sites will open the door to further development and to the development of the much bigger site at SN0340 - the sites shaded in blue are all offered for development.   There has already been extensive development within the Landscape Protection zone at Cringleford and south of the Dereham Road.   It is very important that people make their views (for or against) known by responding to questions 82, 83 and 84 on the SNC website.   Further information is available at the SNC Local Plan website.  Please read the Response below, which will be submitted by LMPC,  you can indicate in your response to questions 82, 83 and 84 whether you support LMPC's comments.  Comments have to be made by 2nd August.   You can also email our SNC Councillors to let them know your thoughts.   If you have problems submitting comments on the SNC website, please contact them on 01508 533805 or at This email address is being protected from spambots. You need JavaScript enabled to view it.

Question 81 relates to site SN1046REV,  it should be noted that the shading on the map is wrong and includes parts of some gardens.   All that is proposed at this stage is to include the land within the settlement boundary as it is now surrounded on all three sides by development.   There will have to be a Planning Application before anything is built there and that will deal with access and overlooking etc.

Because this is all very complicated and will affect the village for years to come, the LMPC will hold Zoom sessions to help explain the background  at the times below - please note that the sessions will be limited to 40 minutes and are only to answer questions, you will need to make your views known directly to SNC.

Please email This email address is being protected from spambots. You need JavaScript enabled to view it. in order to book a place at the Zoom or Village Hall sessions.

Policy 15 of the Joint Core Strategy (JCS) identifies Little Melton as a Service Village in which land will be allocated for small-scale housing growth in the period 1 April 2008 to 31 March 2026, within the range of 10-20 dwellings, subject to form, character and servicing constraints.

In fact, 81 houses have been built in LM since this was written and a further 30 will soon start construction, 90 of these houses were approved because there was not a five year housing supply for the Greater Norwich area.

Little Melton has a small land area and can’t be considered in isolation - the new developments at Hethersett are only 600m from the houses  in LM.   Traffic levels have already increased noticeably and will increase further once development starts on LM Road.   Once the current development on School Lane is complete the number of houses in LM will have increased by over 30% since the last Local Plan and over 1200 houses are in the process of construction within less than a mile from the centre of LM.  There is a current PA for an additional 200 houses at Hethersett which will further contribute to traffic through LM.   There are many complaints to LMPC about traffic through the village and LMPC has been pressing Highways for many years to approve a traffic calming plan that LMPC will pay for.   There are also daily complaints about lorries bound for the Business Park on LM road, passing through the village in contravention of the weight restriction zone.

Parishioners have been complaining for five years about the difficulty of getting access to doctors and dentists and this problem is no closer to being solved.   The Hethersett surgery is already oversubscribed and recently was only accepting emergency appointments for a period of several weeks.

LM is classified as a service village on the basis that it has a shop.   However the shop has been up for sale for many years and no buyer has come forward.  The Parish Council supports the shop and recently explored the possibility of acquiring it as a community shop.  This did not proceed, mainly due to the very limited parking space available and the shop’s dependency on the adjoining house for facilities.   There is no scope for expansion.    It seems unlikely that the shop will continue once the current owners retire.

The PC does not think that there should be any further estate development in LM and that none of the proposed/shortlisted  sites are suitable for estates of 25 houses.   Such development would be contrary to SNVC Objective 3 - Protect the character of villages and their settings.

Limited development that is sympathetic to the surroundings, would be acceptable if spread between sites SN0488 and SN2044.

Comments on the preferred and short listed sites

These sites lie well within the Landscape Protection Zone.  LMPC has always opposed development within this zone and does not wish to see a precedent that would lead to development within the much bigger site SN0340.  The NRP has land designated for expansion that is only 500m from these sites.  Great importance was attached to preserving the much bigger gap between Hethersett and Cringleford - the same principle should apply here.

SN4052 is not adjacent to the existing settlement boundary - Manor Farm barns were converted from redundant agricultural buildings and permitted development rights were withdrawn. If SN4052 is permitted then it will be difficult to argue against development of the extensive land attached to the barns and adjacent properties.

The sites are suggested as suitable for 25 houses/ Hectare,  this is a much higher density than the existing houses (about 10/ Hectare) and double the density of the recent development at All Saints Close.   There is some logic in permitting development along the north side of School Lane with houses at a similar density to the existing but a high density estate on the either side would be completely out of character with the surroundings.

The current recent developments in LM are all within walking distance of the main facilities,  these proposed developments would be 1.6km from the Village Hall and playing field and a lot of car traffic will be generated.   Whilst it may be possible to provide a footpath on the dead end section of School Lane, the path on the lower section of the main road is very narrow.  The road is also narrow at that point and traffic comes very close to the kerb - people do not feel safe to walk there and it is likely that some parents would drive their children to school.

Poor visibility at the junction with Green Lane has been identified as a factor that affects SN0488 - the same problems apply to SN4052!   The junction is at a sharp angle and traffic coming from Green Lane is mostly over the centre of the road when entering the dead end section of School Lane.   When leaving the T junction there is very limited visibility to the right (north) and drivers have to pull onto the main road to see round the fence on the corner.   Visibility to the left is also poor and traffic is frequently speeding down the hill.   There is already extensive traffic from the recently extended office block at the end of School Lane - especially at rush hours.

LM has very few public footpaths - many of the paths currently used are not public rights of way.   The dead end section of School Lane is used daily by dog walkers (there is a well used dog bin there), for exercise and by children on bikes and scooters.   It has been an important recreational facility during Covid  and  outside the rush  hours the road is safe for walkers with dogs on long leads,   this will all be lost if the road is urbanized. 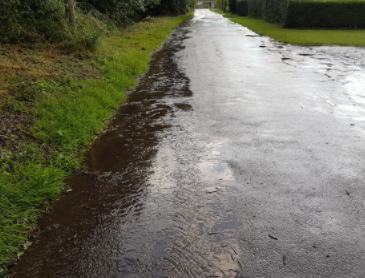 Rainwater from as far as way as All Saints Close reaches the the road via pipes and ditches.   A lot of it just runs down the road and the bottom of the road becomes a lake.  Some of the water is discharged from nearby fields and from Green Lane.   Last winter, the gardens at 107 and 109 were flooded for several weeks as a result of problems with the ditches and pipes - Highways are aware of the problems but there is no simple resolution, due to the relative heights of the pipes.

When the wind blows strongly from the east the noise from the A47 is loud enough to make outside conversations difficult on that section of School Lane and windows have to be kept closed at night. There is also significant air pollution from the road.  Current residents accept these inconveniences in return for not having much traffic on the lane but new houses should not be built so close to the road - SN4052 is on rising ground and will suffer from even worse noise and air pollution.

This site is adjacent to existing development at a density of about 17 houses to the Hectare,  25 houses on this site would be too high a density and not in keeping with the existing houses.

The road to the east is narrow and has no footpath.  If development is permitted here then there should be a cycle path connection to the path alongside Hethersett Lane,  this would provide a much needed  safe route for children cycling to school and for people cycling to work at the NRP, Hospital etc.

It should be noted that when there are roadworks on Hethersett Lane that Braymeadow becomes an alternate route - even for buses!