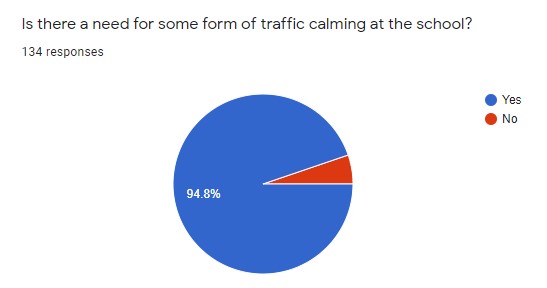 Thank you to the 134 people that responded to the survey.   95% would like to see some form of trafic calming.   A couple of people oppose traffic calming because the road is already obstructed by parking near the school - parents are encouraged to use the Village Inn car park but this arrangement is dependant on the good will of the Village Inn owners.

87% support the scheme currently proposed by Highways.   Several people did not support the scheme because they want the  20mph limit to extend further.  The PC knows that there are lots of problems with traffic and will continue to ask Highways for action but we have to start somewhere and if has taken years to get any proposal at all!

Some people would prefer only chicanes and not humps but others prefer humps and not chicanes.   Reasons given include -

Some people would prefer to keep the 30mph limit but have a speed camera to enforce it.

The PC will now discuss the results with Highways and will report back with their comments.   The PC did originally request widening of the pavement either side of the school in order to create a chicane there but this is not permitted by road safety regulations because of the poor visibility and the number of access points there.  Unfortunately there is a disused field entrance next to the school which has to be kept clear of obstruction as it is a right of way.  Highways have indicated that only humps are possible near to the school.     A 20mph Zone has to be 'enforced' by physical traffic calming measures - please see the ROSPA report.